This weekend Emek Ergun and a committee of doctoral students in the Language, Literacy, and Culture PhD Program at UMBC held our first annual graduate student conference: “Rethinking Intellectual Activism.”

The conference explored the potential meanings and practical implications of “intellectual activism,” which as a political praxis of knowledge production, validation, and distribution, can take many different forms.  By focusing on the notion of intellectual activism, the conference aimed to open a critical discursive space to question and re-imagine the role of the university in maintaining and/or disrupting the systems and operation of power within and through which the institution functions.

Dr. Kaye Wise Whitehead, Assistant Professor of Communications at Loyola University Maryland and graduate of the LLC program, gave an inspirational keynote talk centered around the term “magis” and asking us all, “What kind of scholar, what kind of person, do you want to be?”

Papers at the conference varied in topic from service learning and participatory action research to research on social justice movements and critical perspectives on race, gender, and ethnicity.

In addition, there were roundtables addressing issues and best practices for critical pedagogy and performances that asked attendees to reconsider not only how to talk about politics and how we live it, but, more broadly, what else can be done in the classroom (and beyond–as one dance by MICA’s OluShola Cole demonstrated by taking her dance outside of the classroom, into the atrium and finally out of the building altogether) as well as what counts as scholarship.

Our media installation (Felix Burgos, Landry Digeon, and myself) consisted of a variety of clips highlighting our own interests and questions related to ICTs and digital media, surveillance, and politics.  Landry recorded a short documentary highlighting a range of perspectives on blue light cameras in and around Baltimore; Felix examined the role and public reception of whistle blowers; and I interrupted a series of clips depicting spectacular politics, the Occupy movement, viral flash mobs, and Fox’s short-lived hidden camera show Mobbed (hosted by Howie Mandell). 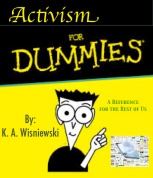 Ultimately, the question I asked is not what do these samples demonstrate but rather what strategies do they employ? And how might they be effectively adapted to our own work? What lessons do they teach regarding attracting audiences, building communities, distributing information, maintaining interest and engagement, and constructing reform?  How can we use the sociopoetics of the spectacle and of business and bureaucratic models to challenge the status quo?

While we introduced and played movies and offered some commentary, we pointed cameras at the audience and placed laptops around the room, which displayed live webcam feeds from around the country–street views, university campuses, tourist sites, and bars.

A complete program of the conference is available here: Intellectual Activism Conference Program.

This entry was posted on April 13, 2014 by k.a.wisniewski in Conferences.