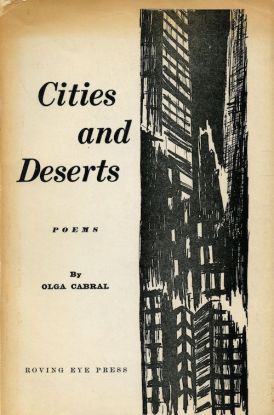 As fate would have it, as I take a brief hiatus from working on the next project with Roving Eye Press, last week, while shuffling through an old used book bin, I discovered a tattered, well-traveled title that caught my eye: Olga Cabral’s Cities and Deserts.

This poetry collection was among the last published by the press while still run by Bob Brown before he passed away that August.  That year he also published two books from Walter Lowenfels, Songs of Peace and American Voices, and had completed work on Mike Gold‘s The Life of John Brown (although this title wouldn’t be released until after Brown’s death).

Both within the REP catalog and poetry at large, Cabral’s work has at present escaped the critical and public attention that it deserves.  She had been writing and publishing a range of stories, essays, and even picture books for children prior to this publication.  First books, especially in poetry, are a tricky work to navigate.  Often they can be scattered, all-encompassing, uneven blankets that showcase years of work and chronicles the new poet’s path to finding voice and style, often sacrificing the cohesion of the work as a whole in the process.

Cabral’s first book of poetry, however, offers a tightly-woven travelogue through 1950s America beginning in San Francisco and landing in New York.  But the glory of the Golden Gate in early morning, the “ghastly neon” of Vegas, the wise majesty of “granddaddy evergreen . . . skyscraper philosophers” in “Sequoias,” and Manhattan’s “traffic jam of stars,” only serve as the backdrop for more pointed observations on the Cold War, unions, bible-thumpers, environmentalism and pollution, the sacred lands of Indian reservations, corporate greed, immigration, and the force-fed images of suburban life.

Rather than continue down this track, perhaps it’s best for the reader to search this title out for themselves (for the REP to reprint this title in the upcoming years?).  Instead, how about a brief but bold spotlight on Olga Cabral and some bibliographical notes to lead the way for future dialogue?   Beginning with the blurbs found on the back cover of the title:

Between office kitchen and husband-lover
this voyager goes through her
18-hour shift
in a Dead Man’s Float
and gives nobody a tumble
that a poem goes on.
When her brain reaches the level
where she can’t breathe anymore
her electronic tongue triggers
the language and a poem
saves us from the Sargossa Sea
of drowning in our daily prose.

Olga Cabral (1909-1997) was born in the British West Indies on the island of Trinidad on September 14, 1909.  Her Portuguese parents, Anthony and Marie de Lourdes Cabral, moved the family to Winnipeg, Canada, before her first birthday and, soon after, moved again to Brooklyn.  Cabral worked a variety of office jobs in her youth, including a long stint as a stenographer, and in the mid-1930s she also began submitting a number of genre stories and pulp fiction (as O. M. Cabral), published in magazines including Thrilling Mystery, Weird Tales, and Strange Stories.  By the end of the decade, she was also building a strong repertoire as a poet, publishing work in some of the leading modernists magazines. She also began writing articles for socialists newspapers, including New Masses and The Daily Worker.

In 1951, Cabral married Aaron Kurtz (1891-1964), a Yiddish poet, critic, and editor, called by one journalist “the leading pro­letarian poet in the United States.”  Kurtz wrote many of his poems under the pseudonym Asrael.  His books of poetry included Figaro (1926), Plakatn (1927), and and Di Goldene Šṭoṭ: Lider Und Poemes (1935).  He wrote essays on Yiddish literature and art and served as editor and publisher of Heintike Lie‐der, a magazine of contemporary Yiddish poetry.  A number of Cabral’s poems portray beautiful scenes and moments of their lives together, and, in “An Ancient Alphabet” (dedicated to Aaron), she so delicately and warmly describes his work, her admiration for his work, and her love for him:

Writing for New Masses put Cabral in contact with some of the most prominent writers and editors in New York (and beyond), including Max Eastman, Mike Gold, Dorothy Parker, and Walter and Lillian Lowenfels.  (“Lillian’s Chair,” a poem for Lillian opened her 1976 collection The Darkness in my Pockets.)  Her long-lasting friendship with the Lowenfels may have put her in contact with Bob Brown.  By the mid-1950s, Brown had moved back to New York City, where he re-started his Roving Eye Press.  In 1959, he published Cabral’s first collection of poetry, Cities and Deserts.   In the early-1950s, Cabral had also published a number of children’s story books, including The Three Jolly Clowns and The Three Jolly Fishermen.

Cabral worked as an activist, an art gallerist and curator, and director of a children’s art workshop.  Her creative work appeared in over forty literary magazines including The New York Quarterly, South and West, Poetry Now, Analecta, Epos, Lampeter Muse, Poetry Review, Human Voice, and Gnosis.  Her next book of poetry, The Evaporated Man, didn’t appear until 1968.  This was followed by Tape Found in a Bottle (1971), for which she won the Emily Dickinson Award. Her next book The Darkness Found in My Pockets was awarded the Lucille Medwick Award from the Poetry Society of America in 1976.

Her other books include In the Empire of Ice (1980), The Green Dream (1990), and the collection Voice/Over: Selected Poems (West End Press, 1993). She also wrote two more books for children, The Seven Sneezes (1948), a Little Golden Book illustrated by Tibor Gergely, and So Proudly She Sailed: Tales of Old Ironsides (1981).  Late in life she wrote:

I have lived through all the wars of this century, together with the rise of fascism, the Great Depression, the cynical witch hunts of McCarthyism, the atom bomb, the Cold War–I’ve seen it all. The twentieth century. My century.

Her brief New York Times obituary reads: “Renowned poet and author, she enriched the lives of all she touched.” 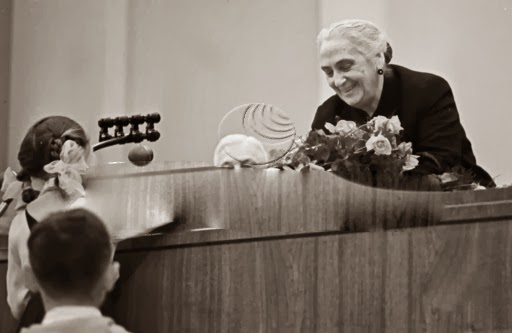 In the Empire of Ice and Other Poems. Cambridge, MA: West End Press, 1980. 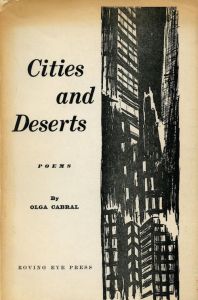 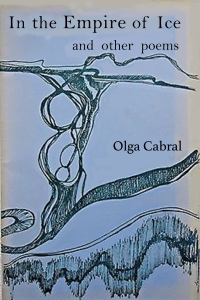