James Rivington (1724-1802) was an English-born printer/publisher and journalist in New York City during the American Revolution. Prior to the revolution, he was one of the most popular and widely read printers in the British-American colonies. During the war, however, he was arguably the most controversial and hated because of his support for the Crown, even though recent scholarship shows that he also served as a secret agent for the patriot’s cause. Regardless of how we view his political leanings or motives, Rivington and his papers shaped the politics of America and the nature of early journalism during the Revolutionary War and early republic.

Rivington moved to New York from London in 1760 and opened a bookstore in Hanover Square, advertised as “the only London store in America.” His shop offered the latest prints from England and Europe and stocked the biggest collection of music, dance, and theater in the colonies. Although his focus remained in catering to the local community in New York City, Rivington also opened stores in Boston and Philadelphia.

In April 1774, Rivington published his first newspaper, The New York Gazette, or the Connecticut, New Jersey, Hudson River and Quebec Advertiser. When colonists began protesting the Stamp Act and other laws they deemed unjust, Rivington remained loyal to the Crown. His 1775 article “The Republican Dissected, or the Anatomy of an American Whig, in Answer to a Farme: Refuted” received bitter resentment from American radicals, including the Sons of Liberty.

On April 13, 1775, Rivington learned that he had been hung in effigy by a mob in New Jersey. The following week, Rivington published his retaliation on the mob: a woodcut depicting his effigy with an argument for freedom of the press. 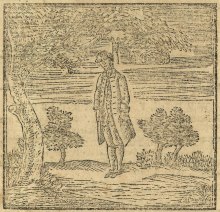 Woodcut depicting James Rivington being hung in effigy as it appeared in Rivington’s New-York Gazetteer, April 20, 1775.

Rivington’s home and printing office were twice attacked and destroyed by a mob of Sons of Liberty in May and November of 1775. Following the second attack, Rivington sailed to England, returning to New York in 1777 with an appointment as the king’s printer. Upon his return, he re-launched his newspaper with the new title, Rivington’s New York Loyal Gazette (and, later, the Royal Gazette). He continued to print this newspaper until which it kept until issue No. 746 on November 19, 1783. The newspaper finally removed “Royal” from its title and survived 12 more issues under the name Rivington’s New-York Gazette.

Rivington’s greatest significance during the American Revolution was the response his work received by patriots including Alexander Hamilton, John Witherspoon, Francis Hopkinson, and Philip Freneau. More recent scholarship, however, shows an interesting twist to Rivington’s story: his role as a double agent, supporting Washington’s New York spy network, known as the Culper Ring. On this thread, Benson J. Lossing writes,

“Rivington’s method of conveying intelligence to Washington was ingenious . . . He published books of various kinds, and by means of these he carried on his treasonable correspondence. He wrote his secret billets upon thin paper, and bound them in the cover of a book, which he always managed to sell to those spies of Washington, who were constantly visiting New York, and who, he knew, would carry the volumes directly to the headquarters of the army.” (Lossing, 297).

Although Rivington’s role as a potential rebel spy adds surprising and controversial elements to his story, it also distracts us from his achievements as a printer, publisher, and author. Loyalist or not, his literary output and his shrewdness as a printer and entrepreneur shaped ideas and culture in New York City and beyond. Reading the pages of his Gazette shows us another perspective of how people locally, across the colonies, and overseas responded to both British policies and activities by the Continental Congress. And reading Rivington—his actions, business activities, editorial work, and publication design—offers us a chance to re-read and reflect upon the Revolution, forcing us to take on new perspectives, new understandings, and new questions. 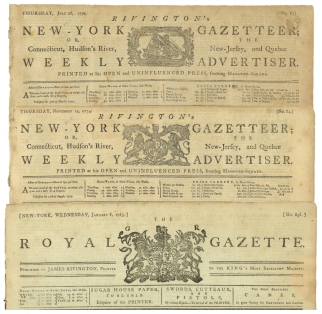 Humphrey, Carol Sue. The American Revolution and the Press: The Promise of Independence. Northwestern University Press, 2013.

Irvin, Benjamin H. Clothed in Robes of Sovereignty: The Continental Congress and the People out of Doors. Oxford University Press, 2011.

*This post was created as an example for my spring 2019 American Revolution course at Stevenson University.  The course blog can be read at: http://revolutionarynoteshist110sp19.wordpress.com/.