Francis Hopkinson’s Ode to the Fourth of July 1788

This summer, I was awarded a fellowship and small stipend to continue my work on American printing history.  The goal was two engage in a reenactment or historical performance / printing project.  The project took a little longer than expected, but, with a little creativity, I was able to negotiate funds into two distinct projects.

The first was to re-produce poet, essayist, designer, jurist, and founding father Francis Hopkinson‘s poem “AN ODE for the 4th of July, 1788.”  Since the poem is the subject of an essay recently submitted for publication and in Chapter Four of my dissertation, I’ll let the poem speak for itself for the time being.  Below, you’ll see my print (on the left) and Hopkinson’s original broadside (on the right, printed by Matthew Carey and in the collections of the Library of Congress).  Second, I was able to donate the leftover funds to Roving Eye Press and the forthcoming pamphlet for Bob Brown‘s poem “Houdini” (scheduled for publication around Christmas).

The video that follows shows some close-ups of my broadside poster, as well as some related images of Hopkinson and paintings depicting scenes from the signing of the Declaration of Independence and the Constitutional debates.  The accompanying harpsichord music, “My Days have been so Wondrous Free,” was also written by Hopkinson.  Earlier this month, I presented my work to the Francis Hopkinson Society, a group of historians, vexillologists, artists/designers, and scholars working to re-invigorate the work and legacy of Hopkinson. 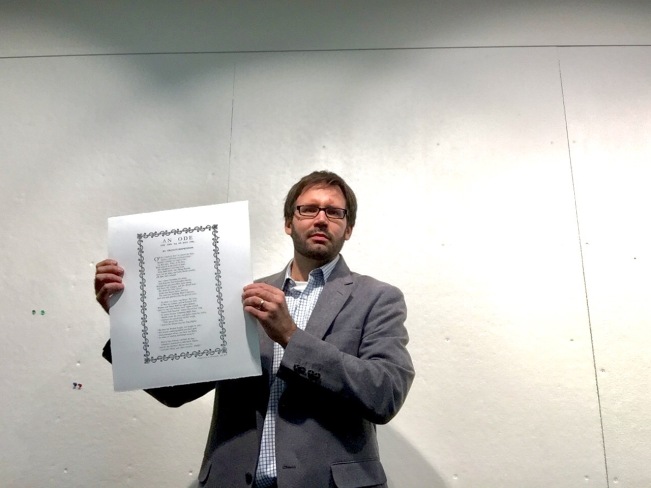